Over the past two years I have built my tea party up to be quite an event and this year was no exception. In fact when I had filmed my baking tutorial with Mel Giedroyc, we had discussed our tea parties (she always holds one too) and she was more than a little bit fascinated that I turned my house into a shopping centre/tea room/pamper place for my tea party! 🙂 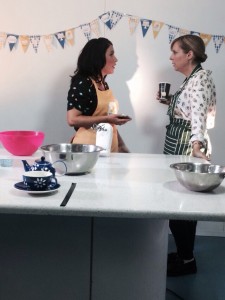 Preparation for my tea party began earlier in the week…it was too early to bake, so instead I began rearranging my house! Furniture had to be moved, toys had to be removed (I may have been mean and told my kids I had given them all away!!) And I had to speak to all of the stall holders to confirm attendance and I also had to check the invite list.

From Wednesday I started to bake. Rocky Road, 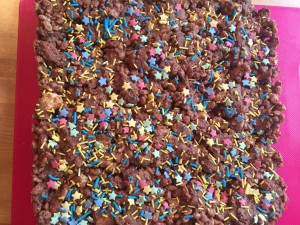 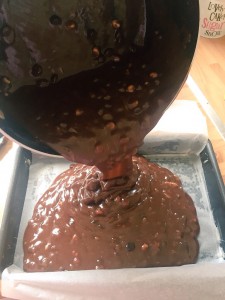 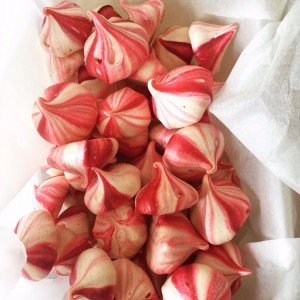 were the first things to make, as well as pastry for my Rugelach and the dough for my Mint Chocolate Chip Cookies (I like making the dough in advance because it’s one more job out of the way!)

On Thursday I continued with the rest of my baking: Chocolate & Banana Cake With Peanut Butter Frosting, Sour Cream Banoffee Cake, 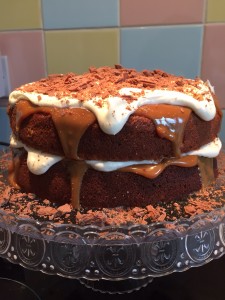 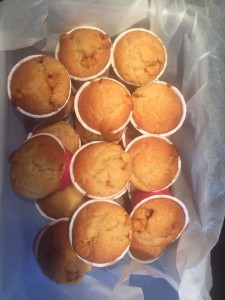 Sprinkle Cookies (adapted from my Bake With Suzy Kids Kit Recipe), and Cookie Dough Cheesecake Slices. Plus I had to assemble & bake my Nutella Rugelach (same recipe as here, but just with Nutella as the filling) and bake my Mint Chocolate Chip Cookies. 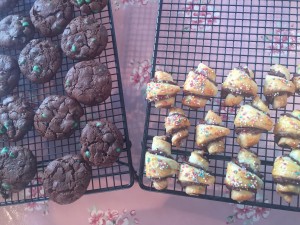 I made my cake signs & bunting, 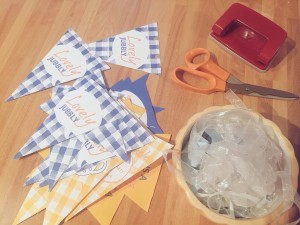 cut up fruit, washed my vintage tea sets, managed a cheeky sushi takeaway with some lovely friends and collapsed into bed covered in icing sugar! 🙂

The morning of the tea party was actually really calm. Stall holders began to set up from 8am. Mr P had taken the day off work, so the kids were his responsibility and I concentrated on the important tasks of my hair and makeup! I’d bought a new dress a couple of weeks ago from Matalan, so I was excited to wear that! 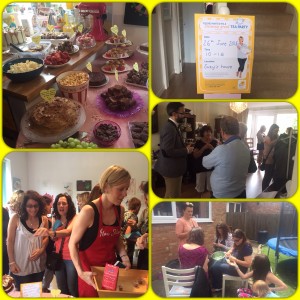 Thankfully the weather was beautiful so people were able to sit outside! The small children there played on my kids’ climbing frame & trampoline and the fabulous Lynsey Tash had brought her massage chair and was giving people incredible massages.

In the living room we had Lollitots & Ciao Bella selling clothes, Chunkydory selling jewellery and BoxD Gifting selling gifts – all stalls were very busy throughout, and I may even have acquired a brand new necklace! 🙂

Upstairs there were spray tans available and also people were using my room as a changing room for clothes they were trying on from Ciao Bella! So there were lots of people everywhere – which was absolutely brilliant!! I had had my usual panic of ‘noone will come….’ earlier in the week, but actually this year it was the busiest yet! In fact we also had Rachael from Marie Curie HQ (plus a giant cardboard teapot attend this year!) 🙂 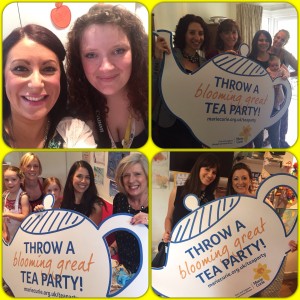 About 15 minutes before the end of the party I called everyone into the kitchen to give a little thank you speech and to draw the raffle. 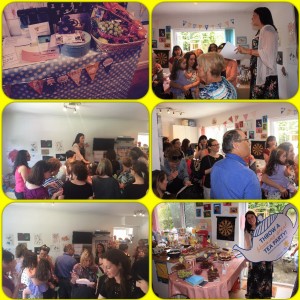 After the raffle was drawn I gave out tin foil and invited people to take as much cake as they wanted home with them, just as long as they gave a donation to Marie Curie! It was only after they had done this that I realised I had promised rocky road and brownies for my kids and there was none left!!!

I must say a BIG thank you to my fellow bakers for their wonderful baked contributions to my tea party: Chintal from Chinskitchen for her Indian Spiced Carrot Cake with Saffron Cream & Salted Caramel, John Holland (a star for offering to bake for me the afternoon before) for his & his husband’s contributions of Banana Bread, Banana Biscoff Balls & Blackcurrant Flapjacks! 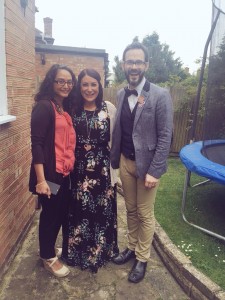 Thanks also to my special friend Claudine for her Luscious Lemon Drizzle Cake, the totally brilliant Elisa for her Strudel Kuchen, the unbelievably kind Susie for her Chocolate Cake & the gorgeous Lucy for her Caramelitas.

And so my 3rd annual Blooming Great Tea Party came to an end and I was genuinely very overwhelmed by the amount of people that had come. Once everyone had left, I counted up the money and I am delighted to announce that my tea party raised just £1000 for Marie Curie!!!!!!!! I am absolutely thrilled with this amount and I know Marie Curie will be too!! 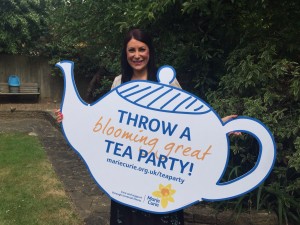 Once again, a big big thank you to all those that came, helped, supported and cared. I’m truly grateful to have so many wonderful people in my life.

I’ll be back next week with a competition with Mr Sherick’s Shakes and some news about the summer! 🙂