Hope you are all fully taking advantage of a time where chocolate consumption that equals or exceeds your body weight is positively encouraged by all!

As well as being Easter, it is also Passover, and for our family, that means a lot of entertaining! Passover commemorates the time when the Jewish people left Egypt after being slaves under King Pharoah. As they were in such a rush to leave, they did not have enough time to bake bread and instead made unleavened bread, called matzah. We eat matzah (a lot of matzah) and no foods which contain flour or yeast for the 8 full days of the Passover festival.

Now these dietary requirements present a bit of a problem to an avid baker like me, but I have learnt to be inventive and I have found some great recipes that work using matzah meal (ground matzah – used in a similar way to flour) and/or potato flour and/or ground almonds. I can assure you, that no one in the Pelta household is even close to starving!!! 🙂 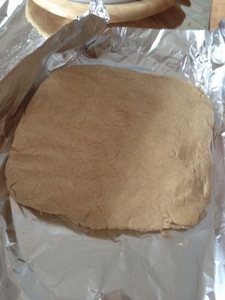 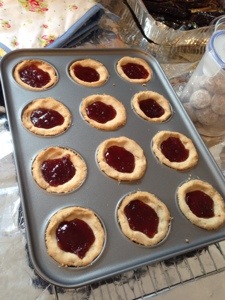 Evelyn Rose’s Passover Pastry works brilliantly for Jam Tarts! You have to make sure you leave it to rest overnight before baking, but it is truly delicious and I must confess to having eaten these tarts for breakfast every day…so far….! 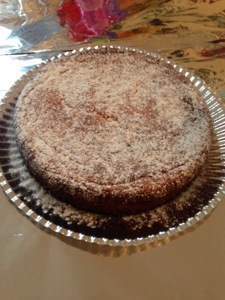 Claudia Roden’s Orange Cake is a fabulously moist gluten free cake, that is just delicious when accompanied by chocolate mousse (1egg per person plus one extra white, 1 rounded dessert spoon of caster sugar per person, 45g dark chocolate per person. Separate eggs, beat yolks & sugar. Melt chocolate and add into yolks and sugar. Beat whites into peaks and fold them into the chocolate mixture. Leave to set in the fridge). 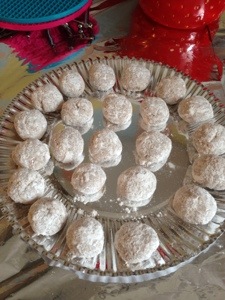 Cinnamon Balls are a Passover staple and they rely on you beating the whites so that they are as stiff as if you were making a meringue (as demonstrated by me holding the bowl over my son’s head!!) 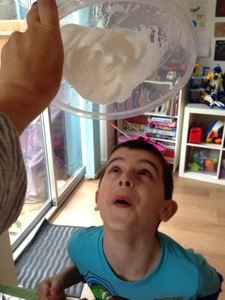 I use Evelyn Rose’s recipe again, with the added twist of putting extra cinnamon in with the icing sugar that the balls are coated in! 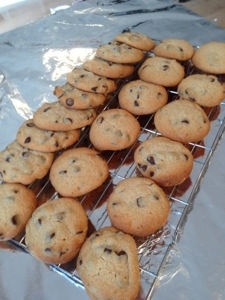 These Chocolate Chip Cookies from The Mother’s Circle Cookbook (I found the recipe on the fabulous Shiksa in the Kitchen blog) are a delicious, soft, chewy cookie that my kids can’t stop eating (literally!) 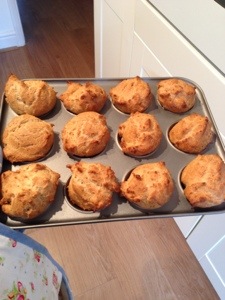 Popovers are great as they have a bread like texture without actually being bread! In fact, they are a cross between a Yorkshire Pudding and a Profiterole. I use Joan Nathan’s recipe, but I add 1/2 cup of sugar as I prefer them sweeter!!

I have made other sweet things, but unfortunately they have been eaten before the camera was taken out of its case! They include Green & Black’s Maya Gold Chocolate Mousse Cake (but I use just dark chocolate for all of the chocolate in it.) Bubbelehs (Passover pancakes) Rachel Allen’s Almond Macaroons and homemade ‘ice cream’ (dairy and soya free creamer whipped to peaks, mixed with icing sugar to taste, chocolate chips poured in, transferred to freezer-safe containers, then allowed to freeze!)

For savoury foods, I currently have a rolled shoulder of lamb in the oven and it smells divine!! For my 20 guests on Tuesday night, I made two types of chicken – salted & roasted with whole garlic and also paprika chicken with sausagemeat meatballs. I also made a Matzah Lasagne, which had beef mince, spinach and mashed potato in it: 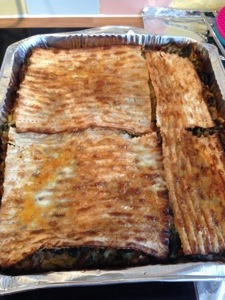 It was so yummy!

I also made my world famous (well in my house it is) Chicken Soup! 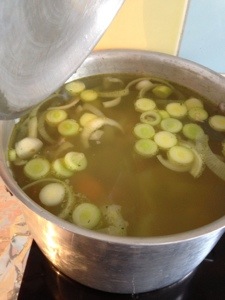 I truly believe that the secret to a delicious chicken soup is leaving it to boil for as long as possible. My Passover chicken soup was on the stove for over 24 hours and it had so much flavour!

I have also made Turkey and Sweet Potato Pie (turkey mince fried over until cooked, with cinnamon, cumin & paprika, put in an ovenproof dish, topped with mashed sweet potato and baked in the oven for 30 minutes at 180 for the top to crisp up!) Green Vegetable Soup (sweat onions in veg oil, add broccoli, courgettes, spinach, celery, leeks. Add chicken stock, bring to the boil, then simmer for 30 minutes. Liquidise and season to taste.) And Salt Beef (the secret to this is to discard the water after it has first boiled. Replace with fresh water, add handful of peppercorns, a bay leaf, brown sugar, dash of vinegar and simmer gently for approximately 3 hours.)

For side dishes I have made roasted cauliflower (my new favourite thing to eat in the whole world), aubergines marinated in chilli and garlic, chopped tomato & cucumber salad, roasted peppers & onions and stir fried broccoli.

So you can see, we have and we continue to eat very well over Passover! I have many more recipes I want to try and I only have until Tuesday night!

In the meantime, if you are looking for a great Easter recipe, don’t forget my Frosted Cookie Cups which are perfect to make and eat with the kiddies!!

Whichever festival you celebrate, I hope you enjoy lots of food and special family time!