Clearly I should have just stayed in bed, though that is never possible with my three monkeys around!

I did however have a great reason to get out of bed last week: a photo-shoot for my new products!

Tuesday was my designated day for baking. I recently realised that if you don’t give your children your full attention, you end up with children that do this to themselves: 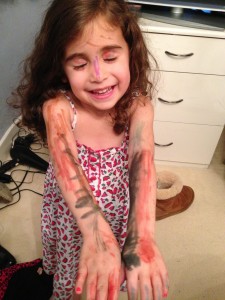 So I had arranged to ship them off to their grandparents.

It was a good job I had.

On Tuesday morning I went downstairs and instantly noticed that the entire kitchen floor was bulging and water was seeping out.

Mr P, who had taken the children down for breakfast (and who had therefore been downstairs for at least half an hour) had noticed nothing.

A bit of clever detective work later and we had found the water source: the stopcock behind a kitchen cupboard. It was gushing water out.

A cupboard was ripped out, the insurance company called, and within 2 hours a lovely emergency plumber was here fixing pipes and things (clearly I know nothing about plumbing!!)

Unfortunately my floor could not be saved 🙁

So whilst the plumber plumbed, I baked and my models were all ready in time for their shoot! 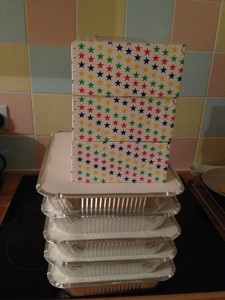 Whilst I was sent to Coventry (not for being naughty…that’s where the shoot was), my downstairs floor was ripped up, three industrial turbo dryers and two dehumidifiers were installed. 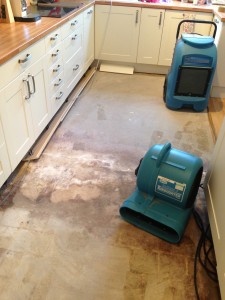 The noise is immense.

As a result of the aforementioned immense noise, I have been trying to escape my house wherever possible.

On Friday morning, I escaped my house and was due to meet a friend for coffee and a catch up. I turned onto the A41 and as I did, my car violently lurched forward and then completely cut out. I just had enough time to sort of park – halfway across a bus stop and half way across one of the lanes of the dual carriageway!!

I got out of the car (lorries were swerving to avoid me) and waited for the AA.

The AA towed my car away. 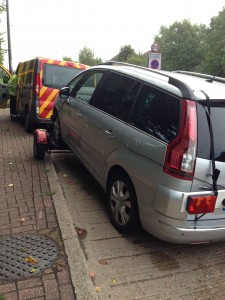 So….my car is broken and so is my floor 🙁

You know what, as annoying as these things are, so far, our insurance company have been brilliant and the issues with my car are covered by warranty. And it’s October….this is my dramatic month of the year!!!

Check out my new recipe: Chocolate Orange Pastry Puffs – they are kind of a cross between a chocolate croissant and a palmier and SO incredibly easy to make and so delicious you just have to eat about 10 (or maybe that’s just me)!

I’m thinking I might go back to bed until November… 😉