So we’ve been home just over a week, and I have just caught up with the washing….

Aside from getting back to normal, I have also been getting back into Olympic mode, now that the Paralympics have started. On Thursday, me and Mr P took our three ‘darlings’ to the Olympic Park. Being the kind of family that we are, we went wearing red, white and blue clothes and Union Jack bowler hats! And being the kind of mum that I am, me and the kids had Union Jacks face painted onto our cheeks! 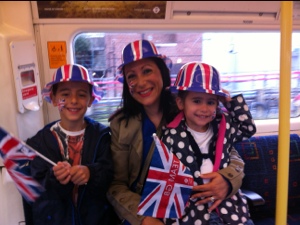 Unfortunately the weather was typically British that day: windy with spitting rain. Amelie is afraid of wind, due to her over-watching of ‘The Wizard of Oz’ and her worry that everything will blow away. This means being outside is not always that fun with her. Matters were not helped by the fact that my Union Jack hat kept blowing off. Every time it blew off, she screamed. It blew off a lot. She screamed a lot.

Louis seemed to think that being inside the Olympic Park was his chance to prove that he should compete in the 100m in Rio. He ran everywhere. He even crouched down into that starter position thingy before running. He ran and ran. I am not a runner. I let Mr P run after him!

Gracie just observed. Occasionally she screamed if the wind was too strong. (She is also not a huge fan of wind). She was happiest when she was eating. (Like Mother like daughter…)

Suffice to say we didn’t stay at the Olympic Park too long. Mr P breathed a sigh of relief when I said I was too tired to check out the Westfield next door. Instead we got the Javelin train and the tube back home, and had a nice early night.

School starts back for Louis this coming week and the girls start school the following week! I guess I’m going to have to bake even more to fill up my time!

Talking of baking…please check out my new recipe: Raspberry Lemonade Cheesecake! I literally went through 10 boxes of raspberries perfecting it and I’m really happy with how fresh and light it tastes!

Right…I need to go and bake a cake for my dad. He’s requested my Chocolate and Banana Cake with Peanut Butter Frosting! I haven’t made it for a while….hope I haven’t forgotten how to!!!!